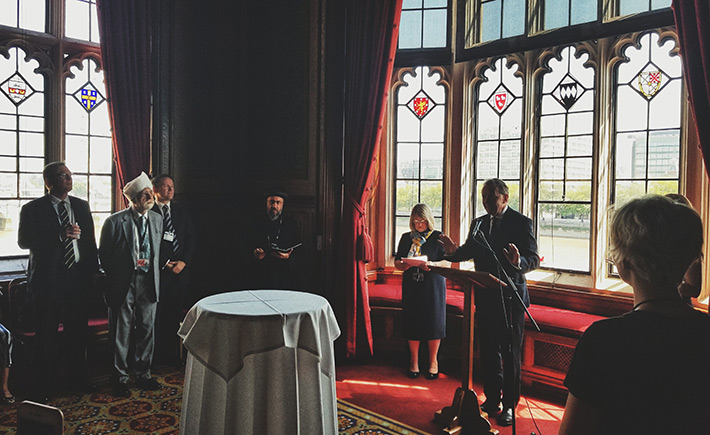 On July 23 in London, events of different proportions raged. This is not only the election of a new UK Prime Minister but also an important event in the British Parliament on the issue of religious persecution. A lot of key UK persons have gathered that pay close attention to the protection of religious freedom as a fundamental human right.

There was Lord Alton, who received the award last week at the Ministerial to Advance Religious Freedom in Washington, D.C. as one of “the fathers of the freedom of religion or belief movement,” as well as the Prime Minister’s Special Envoy for Freedom of Religion or Belief, Lord (Tariq) Ahmad of Wimbledon, and MP Fiona Bruce, a member of the Human Rights Joint Committee and International Development Committee, who has supported last year the initiative of the National Day of Prayer in the United Kingdom.

Also, some religious leaders and representatives of NGOs got a floor. The most of speakers mentioned that the UN General Assembly decided to designate 22 August as the International Day Commemorating the Victims of Acts of Violence Based on Religion or Belief.

Unfortunately, no one of the speakers mentioned the wide scale of religious persecution in the occupied territories of Crimea and Donbas region, caused by Russian aggression against Ukraine. Therefore, after the end of the official part, I privately presented to Lord Alton and Mrs. Bruce the IRF Report “Religious freedom at gunpoint: Russian terror in the occupied territories of eastern Ukraine” and recommended to draw more international attention to the suffering of Ukrainian believers.

A meeting with the Supreme Court Justice Lord Hodge was also very helpful, and a discussion of recent judgments of the Court on religious freedom and the right of believers to freedom of expression, which includes the right to do not express opinions that people disagree with (the so-called “gay cake” discrimination case was won by Asher’s Bakery).

At the end of the busy day, a tour of the Westminster Abbey (for sure, it takes much more than one hour) and a unique opportunity to take part in the evening service at the chorus seats was a real holiday for the soul. This mixed-age choir came to London from another part of the UK specially to perform at the Abby. The sincere and extremely beautiful singing of children was particularly impressive.

London remains one of the key global centers where religious freedom takes a prominent place on the agenda for international affairs. Including the fact that the UK itself and its former colonies faced the challenges of lack of respect for the right of religious minorities to freedom their religion. So there is hope that more determined and practical efforts will be taken at the international level to protect the rights of those believers who still can’t enjoy the gift of religious freedom given by God to every person.

Executive Director of the Institute for Religious Freedom