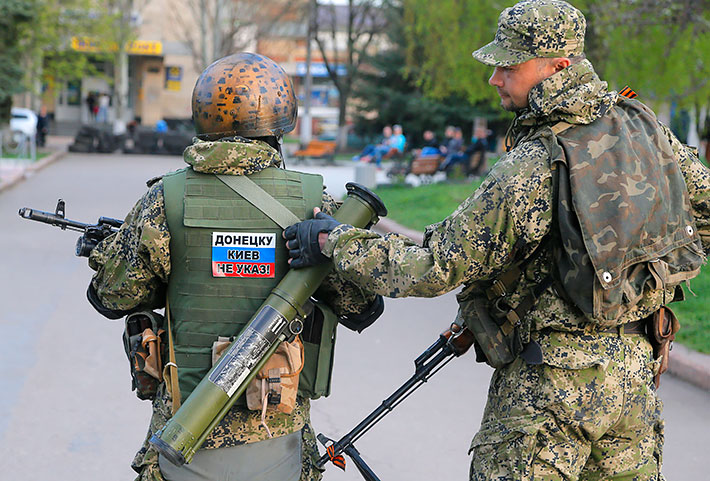 In talking with the supporters of federalization and regional republics in the east of Ukraine who call themselves separatists, you often hear similar reasons given for their protest. Further discussion often highlights significant contradictions in the separatists’ arguments about reasons of their protests. There are the top 8 of those most often cited.

1. Nobody has brought Donbass to its knees and nobody will.

Yet Kyiv residents and western Ukrainians should not have started EuroMaidan, but accepted total corruption, officials’ impunity, pillaging and repression under Yanukovych and meekly awaited new presidential elections.

2.  An armed junta has seized power in Kyiv

In response to this we will take up arms, storm the arms supplies of the Interior Ministry and Security Service in the eastern Ukraine, set up armed checkpoints around the city and region, and also seize television channels, the prosecutor’s office, the mayor’s office and regional administration.

3.  Yanukovych is legitimate even in Rostov on the Don, whereas the new Kyiv authorities are illegal

Therefore, without any elections we will appoint our own “people’s” governors, mayors, ministers, heads of police and leaders of the south-eastern army. No problem that some of them are wanted by the police – after all we’ve already seized the police and prosecutor’s office.

4.  Berkut and the police demonstrated heroism during Maidan. They are the foundation of peace and order in the country.

However we demand that the police in Donbas lay down their arms and don’t obstruct the seizure of official buildings so that we can block the work of the local authorities, plunder their offices and walk around the city with automatic rifles and other firearms for the peace of other city residents.

5. EuroMaidan should have been decisively crushed from the outset in order to maintain calm in the country.

However the armed separatists with automatic rifles, rocket-propelled grenades and seized armoured vehicles must not under any circumstances be dispersed – this is a peaceful protest by ordinary citizens!

6.  Fascism will not succeed in Donbass! Bandera supporters and Right Sector are a threat to the Russian-speaking citizens of eastern Ukraine

To ensure this, we will beat up, maim and kill all our Russian-speaking compatriots if they carry Ukrainian symbols or came to the rally, supporting peace and unity for Ukraine.

7.  America and the EU are using Ukraine to obtain shale gas in the east of Ukraine which will probably destroy the local ecosystem.

We will therefore ask for defence and military assistance from Russia which, although the gas monopoly holder in Europe, clearly has no interest in shale gas fields in Donbass and in the Crimea.

8. Donbass needs autonomy so that residents’ taxes and the profits of  businesses stay there to develop the region

For this we will organize a referendum on federalization and after that join Russia in order to pay taxes to Moscow. We will definitely live better and simply don’t believe that Donbass mines are loss-making and work for Ukrainian business at the expensive of subsidies from public funding.